Italy has a public transport infrastructure of the best the world but never considered to ban motorcycles.

A bitter winter morning in a train station is quite far from the city of Milan, Sophie and her boyfriend Davide very tired after being awake almost all night waiting for the train to the city. In the terminal, passengers traveling fatigue but no one grumpy, spiteful. Simply they have become accustomed to the strike of the transport sector employees.
Every year, tens of Italy strike like. In the same day, the movement of millions of people affected, particularly those who do not have personal vehicles. For that reason, as well as a variety of reasons related to topography, infrastructure and habits of the people, whether public transport infrastructure is very good, cheap, Italy has never calculated to ban motorcycles. 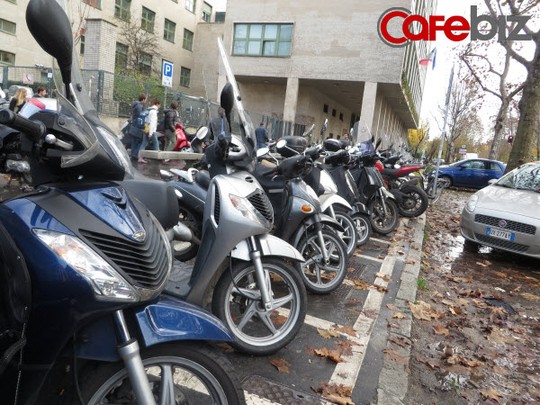 Parking in front of students Bocconi University in Milan, Italy, one of the schools where students were named the richest in Italy.

The Italian designer should public transportation system quite cheaply, people pay a very low cost. Student takes only 22 euro / month went all types of vehicles including unlimited metro, tram, bus. 22 euros in Milan with just four cups of coffee sidewalk. And look back at the history of building the transportation system in Italy to see sweeping views of the country is created.
Only 9 years after the railroad linked the first city in the world built to connect Manchester and Liverpool in England, Italy has completed the railroad ventures of their own city, Naples-Portici line that is the way longer 7.500km. Railway’s second city railway Milano – Monza with a length of 12km.
The generation of leaders Italy then constantly expanding railway system to help the development of trade, transport and tourism. With the strategic importance of military and economic, the Milan – Venice is built next. Mid-19th century, the Italian railway system connects with Switzerland and France. Today Italy ranks 12 in the world in terms of scale rail system.
With the metro, metro system first built in 1955 in Rome, Italy with this system holds a small record in the metro system in the world, there is a small metro system in the world is located in the island of Sicily, the island girl beauty of Italy, with only one track and six stations. The two most active station in Italy is Rome and Milan central station with an average of 270 million passengers per year.

Personal vehicles in Italy is still on the throne

Whether to enhance the role of public transport such but the Italians also very much interested in the role of personal vehicles such as cars, motorcycles.
University students in Italy, including the most prestigious schools like Bocconi or used motorcycle Polytechnic lot. Not because students do not have money, simple, with narrow streets, a short, narrow and crowded cities in Italy, motorcycle very handy. That’s not to mention a lot of people to work with incomes too high to use motorcycles are very popular. Moreover Italy also produced motorcycles stylish, high quality of their own country, why not use?
Go on the streets of Italy, visitors can not help but be impressed by how many motorcycles that? Motorcycles everywhere, from car SH, Liberty, scattered some Hondas common to many types of large motorcycles. Night night sleeping in the city center, not many people from headaches and sleepless nights with still-hours car, motorcycle exhaust sound.
The Italians used motorcycles for many purposes: freight, go to school, go to work, go out around the city. Because the cost of maintaining a car in Italy a year to more than 7 thousand euros, ie approximately 200 million Vietnam and gas money is highly recommended Italian motorcycles are very popular.
Italy is the world leader in the number of companies producing motorcycles, 2nd in the US. The total number of motorcycles in circulation in Italy to over 10 million units, suggesting that 1 in 6 Italian motorbikes. From the early 20th century, Italy had the motorcycle industry with the world’s leading names in history such as Gilera, Benneli, Guzzi, Ducati, Laverda.

To support the motorcycle industry and reduce pollution, the government of Italy in recent years has expanded subsidies for the purchase of motorcycle-friendly environment, such as the size of subsidy programs 2010 was 3-fold increase compared with 2009.
For the Vietnamese, Italian motorcycle brand is most famous Piaggo. It is well known Piaggo but in fact, this company ago from Rinaldo Piaggo founded by the late 19th century until the last two World Wars, Piaggo specializes in manufacturing and locomotives and aircraft game.
After the Second World War, when the production facilities were destroyed devastated by Allied bombing and the country Italy is extremely difficult economic and urgent need arises for Enrico Piaggo son of the founder, is the means of production are consistent with the needs of the Italians.
1946 Vespa was born. In 10 years, Piaggo has sold more than 1 million cars. Italy has added a new word in the dictionary: Vespara – ie go out with Vespa. In late 1950, Piaggo by Fiat SpA acquired.
Having had a very difficult period in the 1990s, the Vespa has been restructured in a way the Japanese management style to be successful today. Unlike style American restructuring, leadership Piaggo not dismiss any worker by promoting the role of each person in the chain of production, and the first time for conditioning installation in buildings for workers to help increase productivity.
The Italians also like to use a bicycle. In recent years, as the economy increasingly difficult, as the bike is preferable. In 2011, the first bicycle sales were higher auto sales reached 1.75 million units.
60s, car ownership is seen as a symbol of success and wealth in Italian society. Now a day when high unemployment and high gas money to the highest level in Europe, the cost of maintaining a car each year up to 7,000 euros, the Italians turn to the bike.
The population is about 60 million, but there are 6.5 million Italians often use the bike every day to go to school, go to work and about 10 million people use them for the weekend.
The government is encouraging people to use private vehicles environmentally friendly. The opening session of the International Bicycle Exhibition EICMA 2009, representing the Italian government has announced programs for 7.6 million euros to encourage people to buy the bike after 11.4 million euro program was brought before it ended.
The tens of millions of euro program has helped dramatically increase sales of bicycles, scooters and motorcycles environmentally friendly. And 7.6 million euro package was announced helped 70,000 scooters, motorcycles and bicycles are people buying. Italian Environment Minister declared: Italy will compete fiercely with the Netherlands, Denmark and Germany to increase the number of bicycles.
The Government has also invested significant amounts of money to develop public bicycle system. Everywhere in the streets of Italy, one can encounter the yellow bike. People can rent a car to use it within 30 minutes for about half a euro, if the rent price is 2.5 euros all day. Users can take any car at any station and return it at any station that they found, from 7 am to 12 pm. Currently, this service has more than 13,000 subscribers use under five.

Good investment for public transport so that the Italian government has never account banned motorcycles (not mentioning the reason Italy is home to many famous motorcycle manufacturers in the world). The personal vehicle ownership low as motorcycles, bicycles are not only popular in Italy but also a lot of other European countries, even Switzerland. 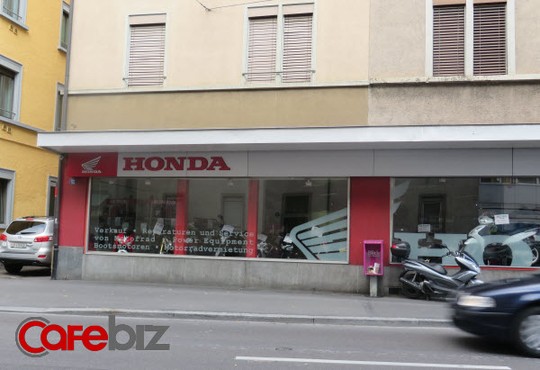 The idea that in European countries, motorcycles only be used as a carman long existed in Vietnam could not really accurate. Motorcycles used here is very popular in many subjects, students, low-income or high-income people to own more types of media preferences.
Therefore, the prohibition on motorcycles or not, should be taken into account many factors income people, topography, public transport infrastructure, habits, not only based on subjective opinion without considering the image entitled to actual policy.
* The author is Master of International Relations at the University of Bocconi, Milan, Italy