HANOI – Vietnam’s fledgling airline industry is poised for a boom as local competition heats up with fleet expansions, new routes and planned share offers that are set to make it one of the world’s three fastest growing markets. 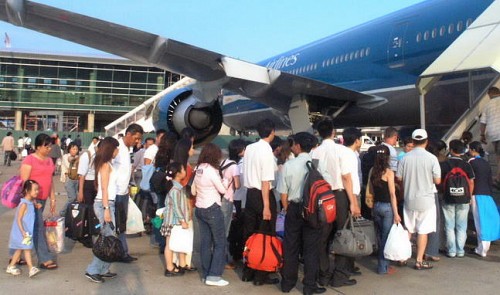 Even as the local economy chugs along at about 5 percent growth, its slowest pace in 13 years, demand for domestic air travel is growing by double digits. That is translating into a surprisingly robust new source ofbusiness for Boeing Co, Airbus and regional aircraft makers such as Mitsubishi Aircraft Corp, Bombardier Inc and Embraer SA .

Though starting from a low base, Vietnam’s carriers will boost their fleets in the next few years, double or tripling them to serve a domestic market of 90 million people and tourist arrivals growing on average 20 percent annually.

The low-cost carrier is aiming for a stock market listing in either Hong Kong or Singapore in 2015 to fund the expansion, which would start with flights to Tokyo, Beijing, Singapore, Kuala Lumpur and South Korea, then eventually, China, Russia and Australia and beyond, Managing Director Luu Duc Khanh said.

“Further it could be the United States, where 4 million people of Vietnamese origin live. They’re waiting for VietJet anxiously,” he told Reuters in an interview.
VietJet plans to double its fleet by 2015 to 20 jets, and is speeding up work to get three joint ventures in the air, including one with an undisclosed carrier in Myanmar and another agreed with Thailand’s KanAir, to operate in early 2014

VietJet’s bold expansion after less than two years in business could raise the stakes not only at home but in Southeast Asia’s fast-growing low-cost market, dominated by Malaysia’s AirAsia Bhd and Indonesia’s Lion Air.
Those ambitious plans may have shaken state-run flag carrier Vietnam Airlines (VNA) into expediting its long-awaited initial public offering and fleet expansion.

VNA dominates the local market and will increase its fleet by 28 percent to 101 aircraft by 2015. It has been preparing for an IPO in the second quarter of 2014.
“The project is right on schedule,” said its spokesman, Le Truong Giang.

Its fleet includes both Airbus and Boeing jets and it has ordered the Boeing 787 Dreamliner and the Airbus A350. According to Boeing, VNA has existing orders for eight 787s and 11 more through leasing companies.

The airline also has its hand in the low-cost market through a stake in JetStar Pacific, a joint venture with Australia’s Qantas Airways. JetStar plans to more than triple its fleet of five Airbus A320s to 16 in the next few years, a spokesman said.

The airlines and industry experts say the growth potential comes mainly from Vietnam’s topography and what Khanh of VietJet called a “fortune location”.

Vietnam is 1,650 kilometres (1,025 miles) in length, its biggest cities and tourist resorts are far apart and it has poor road and rail infrastructure.
It is also within a few hours of Japan, South Korea, Hong Kong, Thailand and China and tourist arrivals are on the up, with 5.5 million in the first nine months of the year, a 10 percent rise from the same period in 2012.

Khanh said expansion would be gradual as the carrier takes delivery of five to 10 Airbus jets each year until 2022.

VietJet’s joint-venture plans were therefore a smart move, said Timothy Ross, an air transport analyst at Credit Suisse in Singapore.
“I can’t imagine they have much on their balance sheet… so in terms of building a new business it’s far better to give away some of the potential upside and invest less,” he said.

JetStar had not been profitable and was likely to struggle as competition increased, Ross said, while VNA had not done itself any favours delaying privatisation.

“We should have seen the Vietnam Airlines IPO 3-5 years ago, but it sat on its hands,” he said. “Competition in the airline industry is inevitable.”