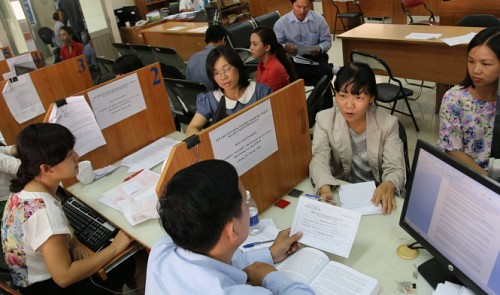 The Vietnamese General Department of Taxation added some businesses it had previously praised for fulfilling tax responsibilities to the list of tax debtors, and eventually had to say sorry to the wrongly accused firms.
The taxation authority “admits faults” and apologizes to businesses for the “inconvenience it created with the mistakes in updating tax debtors data” in a press release sent to several media agencies on Wednesday.
On July 20, the taxman, managed by the Ministry of Finance, released a list of 600 tax debtors on its website and that of the ministry, apparently to denounce what it deems stubborn taxpayers.
However, shortly after the document surfaced online, 34 businesses in Hanoi and 26 in Ho Chi Minh City protested that they did not avoid tax responsibilities.
Some of these, including The Gioi Di Dong and Nguyen Kim, two leading electronics chains in Ho Chi Minh City, had earlier been invited by the city’s tax authority to attend a ceremony to praise model taxpayers.
Those businesses that claim to be wrongly accused of avoiding taxes thus requested that the taxation department rectify the information, remove them from the list, and apologize to them.
Although the General Department of Taxation started reviewing the tax calculation immediately after receiving the complaints, it was not until nine days later that they issued the official apologies.
Le Xuan Duong, deputy head of the Ho Chi Minh City tax department, confirmed to Tuoi Tre on Wednesday he had signed apology letters for 20 city-based businesses wrongly accused of owing taxes.
While the department received complaints from 26 firms, it has verified that six of these had wrongly declared their tax payments on their own responsibilities.
“So only 20 businesses have beenapologized to,” Duong explained.

Two hundred of the 600 businesses in the tax debtor list were suggested by the Ho Chi Minh City taxman.
In the press release announcing its apology, the General Taxation Department attributed the mistake to “software errors.”
Something must have gone wrong during the data transfer process, as the department is switching to new tax management software, it said.
The department, however, said it did not rule out the possibility of human error, as some officials might have made careless mistakes in data input.
On July 24, the department head, Bui Van Nam, said it was “no big deal” if the tax authority had made a mistake.
“Why so serious while we can correct those that are incorrect?” he told Tuoi Tre (Youth) newspaper.