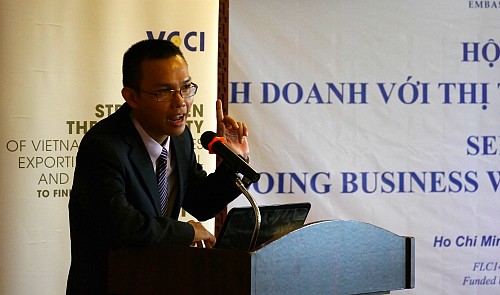 Local exporters will earn much more if their products are put on the shelves of retail stores in Northern Europe following the expected signing of a free trade agreement between Vietnam and the European Union (EU) this year, an expert said at a conference in Ho Chi Minh City on Friday.

Once successfully penetrating the Finnish market, and then expanding into other Northern European markets, Vietnamese exporters will generate much higher export revenue than what they can earn in other EU markets, Le Ky Anh, a trade and economic officer at the delegation of the EU to Vietnam, remarked at the “Doing Business with the EU and Finland” conference.

The government of Finland has begun funding the FLC14-04 project, which will help Vietnamese enterprises with the export of agricultural and aquatic products to that specific nation and the Northern European region, he said.

The FLC14-04 project will be implemented to organize activities to promote the image of Vietnamese goods in those markets and offer Vietnamese firms a chance to get into thecountries, Anh said.

Via the project, the government of Finland, in cooperation with the Vietnam Chamber of Commerce and Industry, has opened many training courses for Vietnamese companies to keep them informed of any market update.

Under the project, many study tours for Vietnamese enterprises to survey the Nordic market have been organized, Anh added.

The project management unit will post information on their business and capacity on its official website after finding out about potential Vietnamese exporters.
The website will help Finnish importers look for information on capable Vietnamese exporters and sign cooperation agreements with them immediately with no more verification needed.
As Vietnam and the EU are complementary economies, the former’s exports to the latter will not be challenged by goods produced by the firms there, Anh said.
Vietnam is good at producing and processing agricultural and aquatic products, which are contrary to the Nordic countries which have advantages in machinery and technologies, he elaborated.

Moreover, because it is very cold in Northern Europe, most agricultural commodities are imported from abroad.
This will be the potential markets for Vietnamese agricultural exporters, Anh asserted.

Vietnam has posted strong growth in exports to the EU market with consistent annual rates of 15-17 percent, he said.
Last year, bilateral trade between Vietnam and the EU surpassed US$36 billion and the Southeast Asian country enjoyed a trade surplus of around $19 billion, the trade and economic officer cited official figures.

The EU accounted for 19-20 percent of Vietnam’s exports of key products in 2014, 36 percent of the country’s phone exports, 35 percent of its leather-shoe shipments, and 16.8 percent of its outbound apparel sales.

Once the trade pact between Vietnam and the EU is signed this year, the bloc will liberalize 95-97 percent of tariffs on Vietnamese goods and thus local firms should prepare to make the most out of this opportunity,